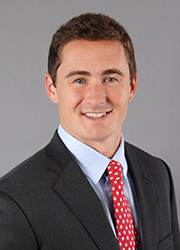 As a student at the University of Virginia School of Law, Sean Twomey spent hours working with a local lawyer who had taken on pro bono cases with The Veterans Consortium. Under the lawyer's supervision, he was given the opportunity to write briefs on behalf of veterans and was thrilled when "his" brief helped secure a victory for the widow of a Vietnam veteran.

Today, Twomey, a litigation associate in the Los Angeles office of Gibson Dunn & Crutcher LLP, takes on cases from The Veterans Consortium himself so he can do the same mentoring with local law students. "The more cases we can take, the more veterans we can help," says Twomey, 33, who became the founding attorney for the pro bono veterans law project at the University of California Irvine School of Law. "It's a great way to get law school students involved in this type of law."

For his dedication to veterans and law students alike, Twomey has been selected as The Veterans Consortium Volunteer Inspiring Pro Bono (VIP) for October 2018.

Twomey's passion for helping veterans was inspired by a photo of his grandfather, a U.S. Marine Corps pilot, clad in all his gear and standing in front of his plane. It hung in his grandparents' San Diego home when Twomey was little and that image is seared in his mind. "I have a similar look, but I'm nowhere near as awesome as he was," says Twomey, who grew up in Santa Barbara, California. Still, he credits that photo and the years of family military service as the motivation for his pro bono work with veterans.

Both of Twomey's grandfathers served in World War II, with one serving in the Korean and Vietnam Wars as well. He also has uncles who are veterans of Desert Storm. He remembers how well his grandmother was treated by the Veterans Administration, but he knows that's not the case for all veterans and their families. "Part of what I can do as a lawyer is help people who haven't been treated that way," says Twomey, who got his undergraduate degree from UCLA.

Twomey enjoys practicing law because it reminds him of his years of competitive sports, growing up playing soccer, football and baseball. "Our litigation team gets along like teammates and we work together to win," Twomey says.

Courtney Smith, Senior Director, CAVC Practice for TVC, calls Twomey, "The ultimate team player. The work that Sean has done over the years is inspiring. He turned his law school initiative into an opportunity for so many UC Irvine students, who may go on to take pro bono cases themselves one day. We truly appreciate Sean's dedication to our Program and commitment to spread our work on behalf of veterans and their families, who are always sacrificing for our nation."

Twomey enjoys the outdoors and spending time with his rescue mutt, Freyja.