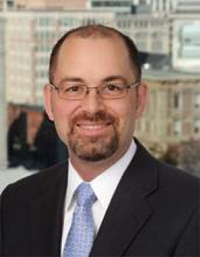 A glance at Adam Hess’ biography on the Venable LLP website, where he is a partner, leaves one to wonder how he would ever find “free” time to delve into other interests. But Hess, an Intellectual Property attorney who works in patent infringement litigation says he finds plenty of time to volunteer, pursue family time and passions of snowboarding, mountain biking, backpacking and golf. For the past 13 years, that “free” time has included pro bono work for The Veterans Consortium, tackling six cases. For his diligence and perseverance with these cases, Hess, 52, has been chosen as The Veterans Consortium Volunteer Inspiring Pro Bono (VIP,) for April 2018.

Hess grew up near Reading, Penn., and was one of the first in his family to go to college. Some of his relatives joined the Air Force, and others served in the Army and Marine Corps. “Their service meant something to me, and I saw TVC as an opportunity to do my part,” says Hess, who lives in Arlington, where he and his wife raised two children. “I don’t remember how I first heard of [TVC], but their training program definitely caught my eye.”

He especially enjoys helping Veterans who have “fallen through the cracks” in their efforts to navigate the Department of Veterans Affairs process. Currently, he is working on a case for an Army veteran from Puerto Rico who is seeking benefits for a service connected disability. “It’s been up and down a few times,” Hess says, describing several trips to the U.S. Court of Appeals for Veterans Claims and back to the regional office on remand. Most recently, the Court held that the veteran was entitled to service connection dating to 1955 and remanded the matter for determination of benefits. “Now, we are just waiting to hear back from the regional office.”

Hess received a chemical engineering degree from Lehigh University before going on to The George Washington University School of Law. Although he says his practice doesn’t focus on any one particular technology, “I use the technology I learned as an undergraduate in all of my cases.” But what he mostly sees is a great difference in Intellectual Property law and Veterans law.

“Intellectual Property matters can sometimes seem dry and focused on corporate revenue, rather than on an individual’s well-being,” Hess says about his Intellectual Property work. “But for veterans, these benefits can have a meaningful impact on their lives. Helping them in this way brings me a tremendous amount of satisfaction and I am glad to do my part.”