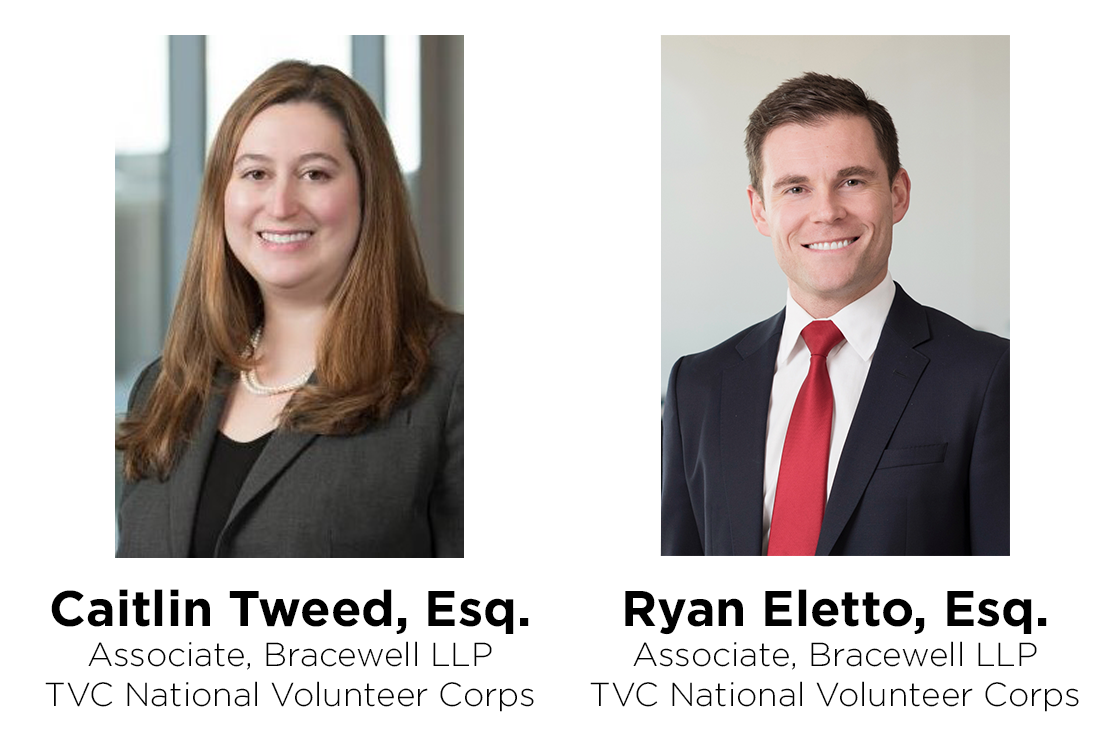 Caitlin Tweed’s involvement with The Veterans Consortium (TVC) began in 2016 in quite an understated way. One of her colleagues was leaving Washington, DC Bracewell LLP office for another opportunity and asked her to take over his pro bono case. As a result of that simple handoff, Tweed has embraced veterans law work, earning remands in cases and coordinating TVC’s Volunteer training for other attorneys at her firm.

Her Bracewell colleague, Ryan Eletto, was introduced to veterans law through a clerkship at the United States Court of Appeals for Veterans Claims. When he went into private practice at Bracewell, Eletto was happy to utilize his clerkship experience within the firm’s pro bono program. He has successfully navigated a case to the remand stage and helped orchestrate the training by TVC of other Bracewell lawyers who are now ready to take cases.

For their efforts to help grow the TVC pro bono program at Bracewell and for their exemplary service to veterans through their own representation, Tweed and Eletto have been selected as The Veterans Consortium Volunteers Inspiring Pro Bono for August 2019.

“Working with Caitlin and Ryan has been a true pleasure,” says Courtney Smith, TVC Senior Director, CAVC Practice. “Their energy, enthusiasm and effort in setting up a training session at their law firm takes their personal commitments to taking on veterans cases and multiplies that exponentially. More attorneys taking on cases means more of our veterans are being served and receiving the benefits they deserve. We can’t thank Ryan and Caitlin enough for being catalysts to make this happen.”

Eletto, 30, grew up in Southern California, about an hour northwest of Los Angeles. After graduating from the University of Southern California, he decided to venture to the east coast for law school at the University of North Carolina, Chapel Hill. His clerkship brought him to the nation’s capital and his practice now involves environmental regulatory issues, litigation and investigation matters.

His current pro bono case involves a veteran who suffered a knee injury in 1968, while serving in the Army. The veteran sought benefits for this injury in 2010 after more than 40 years of suffering with the injury.

“He was denied service connection due in part to the long lapse between his in-service injury and when he decided to seek benefits,” Eletto explains, but people who knew the veteran before and after his injury attest that he has suffered from these symptoms since he served.

Tweed, 31, a native of Houston, Texas, did her undergraduate work at the University of Chicago and received her juris doctor from American University, Washington College of Law. She also does regulatory work for Bracewell, mostly relating to oil and gas pipelines. She has found her work with TVC to be great experience for her, as it is more litigation focused.

But beyond the experience, Tweed describes the “great feeling to get remands for veterans who may not have had a fair go-round the first time."

“There’s something about the appeals process I like,” Tweed continues. “It forces the government to do their part by telling the Board to do a better job with their decisions. It’s giving back to the whole community by making sure they are doing their job right.”

Eletto, who lives in Washington, DC and enjoys playing soccer in his free time, credits Katy Clemens, the mentor TVC assigned to him, for her assistance on his cases.

“She’s been incredibly helpful, a wealth of knowledge and very generous with her time,” he says.

Tweed also lives in Washington, DC and participates in a community chorus. She and her husband are expecting their first child in the next few weeks.