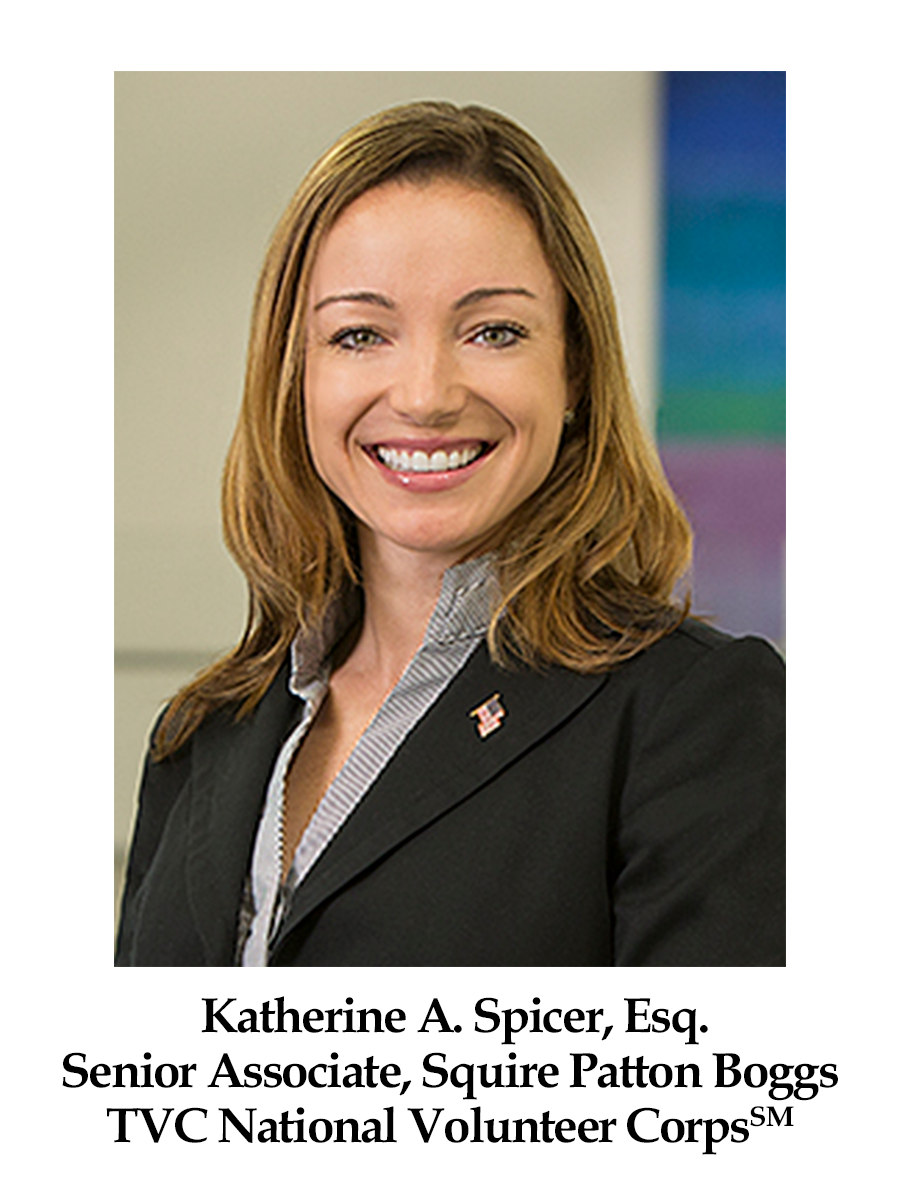 There’s a fine line between two groups of lawyers at Squire Patton Boggs who are assisting veterans by taking on pro bono cases to help with discharge upgrades as part of the TVC Discharge Upgrade Program℠. The line is defined as Army or Marine Corps. When associates sign on to help with a veteran’s case as part of the firm’s longstanding tradition of providing legal assistance without pay, they are assigned to a team.

The Marine Corps team is led by Katy Spicer, who served more than 14 years as an active duty Marine and is a Major in the Marine Corps Reser ves. The Army team has David Bean at the helm. Bean served five years of active duty service in the Army and is now an officer in the Virginia National Guard.

“We recognized the need and our ability to serve the need,” Spicer says of her firm’s work with veterans seeking a discharge upgrade. “We created this pipeline to bring as many attorneys to the table as possible.” Bean says the Marine Corps/Army designation “started out playfully” when they realized several Army veterans were in his group and several Marine Corps veterans were in Spicer ’s group. Now the name tags have stuck. And while currently there is no actual competition between the two groups, they will certainly be cheering for each other as cases are decided.

For their efforts in devising such a unique workplace pro bono opportunity, attracting colleagues to also donate hours in service to veterans and for leading their Army and Marine Corps teams, Katy Spicer and David Bean have been selected as The Veterans Consortium Volunteers Inspiring Pro Bono (VIPs) for March 2019.

“We love the incredibly creative way that Katy and David have established teams and divided the workload on these cases,” says Danica Gonzalves, Equal Justice Works Fellow for TVC. “They have attorneys not just in Washington, D.C., but from Denver, San Francisco, New York, really all over the country, who are stepping up to help our veterans in need. We couldn't be happier to have them as part of our TVC National Volunteer Corps SM.”

Spicer grew up outside of Detroit, the fourth of six children. Although her parents were not in the militar y, Spicer and three brothers all served. After earning abachelor’s degree at Florida State University, she joined the Marine Corps shortly before 9/11. The terrorist attack on U.S. soil that day only proved to solidify her decision.

“If you’re going to do it you should do it with the best,” she says, adding that she always felt called to serve, and growing up, idolized Army Generals Colin Powell and Norman Schwartzkopf, Jr. “It was my time, my responsibility to step up.” After working as a supply officer, Spicer was selected by the Marine Corps to study law, which she did at Michigan State University, before serving as a Marine Corps prosecutor. During her career, she deployed to Afghanistan and twice to Iraq. She feels a special dedication to fellow veterans who served in those same regions. Katy is a major in the Marine Corps Reserves and is the reserve staff judge advocate for Marine Corps Base Quantico.

“It was a special generation of service members from 2001 on,” Spicer says, adding that living through it first hand and seeing the sacrifices and commitment of these young people makes her work with these veterans today so much more rewarding. “It serves as a second calling to me. I’m in a position at this incredible law firm with all of its resources to step in and help them with their discharges and try to make it right.”

The case her team of 13 is currently working on involves a Marine who enlisted in the early 2000’s “as a very young kid.” He led combat patrols at the age of 20, took part in a heroic level of combat and witnessed the deaths of people close to him, Spicer says. Then, “the demons so many combat veterans suffer from led him to start self-medicating.”

He received an Other Than Honorable discharge, despite his efforts to get help and his well-documented struggles. “He’s shown incredible integrity throughout the whole thing. Even in spite of his own setbacks, he donates countless hours and boundless energy to veterans causes. He is a model American and a hard working citizen,” says Spicer, who lives in Washington, D.C. with her husband and 20-month-old son. “For our clients it’s not about restoring lost benefits, it’s about pride.”

David Bean’s team of 10 is tackling the case of an “incredibly decorated officer” who earned a commission after enlisting and served for 14 years. He spent 870 days deployed in Iraq and Afghanistan and now suffers from severe Post- Traumatic Stress Disorder (PTSD). “He was one of the top security people for the top generals and admirals serving abroad,” Bean says, noting that his condition led him to stay in his stateside home for six months rather than move with his unit to a new station. This resulted in his Other Than Honorable discharge after “a heck of an Army career,” Bean says, noting that the case is ready and will soon be filed for review and a decision.

Bean is a Kansas City, Missouri-native who grew up in Laguna Beach, California. He headed east to study at Cornell University, where he received a bachelor ’s degree. He worked as a special education teacher for Teach for America in Washington, D.C. while earning a Master of Education at George Mason University. He received a law degree from Washington & Lee University before joining the Army. He served as an administrative law attorney and prosecutor while spending a majority of his Army career at Fort Hood, Texas.

“It had always been something I wanted to do,” says Bean, whose grandfathers served in World War II and who grew up near lots of military families serving at Camp Pendleton. “Our generation was highly forged by what happened on 9/11.”

Bean loved his Army years, but says he’s thrilled to be working with veterans in this capacity. “It’s a great firm wide experience for us to support,” says Bean, who lives in Vienna, Virginia with his wife. They are expecting a son in July.