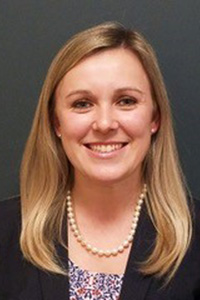 Alexandra Curran was in her first year at Roger Williams University School of Law when her husband, Justin, joined the U.S. Marine Corps. During her third year of law school, her husband was deployed to Afghanistan. Curran, then the mother of two boys, 2, and 3-months-old, held down the fort. Just a few days after her graduation, his tour abruptly ended. Justin was injured by an improvised explosive device (IED) and put on the Temporary Disability Retired List, which involved a lot of paperwork. Even though his injury and its cause were clear-cut, Curran realized that the Department of Veterans Affairs [VA] disability system could be overwhelming. "I thought, if this is confusing to me, it must be confusing to other people, too. People may need assistance," she says. "At the time, I didn't realize this was a type of law, because we didn't have any classes in veterans disability law."

Curran, 33, took her first job after law school and clerkships in the specialized area of veterans law. Soon she was immersed in 150 veterans' cases at a time. Now, working in medical malpractice with Tate & Latham in Providence, Rhode Island, Curran still finds plenty of opportunities to represent veterans by taking federal Veterans Pro Bono Program cases before the U.S. Court of Appeals for Veterans Claims. For her deft handling of a great volume of veterans appeals above and beyond the call of duty, Curran has been selected as The Veterans Consortium Volunteer Inspiring Pro Bono (VIP) for November 2018.

Courtney Smith, Senior Director, CAVC Practice for TVC, is impressed with the caseload that Curran takes on while taking care of her family, which now includes a daughter, as well as her medical malpractice clients. "Alexandra works tirelessly on behalf of our veterans. She never hesitates to take on more and more pro bono cases. She is a go-to attorney who is dedicating countless hours in service to our veterans."

Currently, Curran is juggling multiple pro bono cases, but she admits, "The VA cases truly don't feel like work to me, so I don't mind helping as much as I can." After she began working at Tate & Latham in 2016, Curran, a Rhode Island native, realized she really missed her work with veterans. She found out about The Veterans Consortium and through it began taking federal Veterans Pro Bono Program cases. Although her grandfather and several uncles served in the military, Curran says she never appreciated it until she lived it with her husband. "That's why these cases mean so much to me, I can really relate to these veterans and my clients seem to appreciate that I've experienced some of what they are going through."