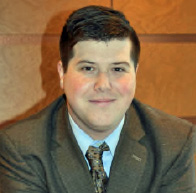 Several extraordinary experiences and advice that stuck. That's what gave Joshua Carmel the guts to approach his boss a few months after graduating from law school to ask if he could take on a pro bono case. Lance Kalik, a co-managing partner of Riker, Danzig, Scherer, Hyland & Perretti in Morristown, N.J. didn't hesitate in his support, opening the door for Carmel to take his first case for The Veterans Consortium Pro Bono Program. Since then, Carmel, 27, has helped TVC recruit other lawyers to take pro bono cases, as well. For his efforts, energy, enthusiasm and support of veterans above and beyond the call of duty, Carmel has been selected as The Veterans Consortium Volunteer Inspiring Pro Bono (VIP) for June 2018.

As an undergraduate student at Gettysburg College, Carmel got his first taste of legal work as an investigator in the public defender's office in Adams County, Pennsylvania. His boss, Kristin Rice, "inspired people around her, especially instilling the desire to perform public service in general," Carmel says. He was working with Rice one summer when the office received a highly publicized death penalty case. That experience so affected Carmel and his mindset that he describes it as "one of the most visceral and formative experiences of my life, which marked a complete 180. It turned public defense on its head for me." It also made Carmel more open and thoughtful when he was involved with a second death penalty case as a legal fellow working at Emory University School of Law's Volunteer Clinic for Veterans. A founder of the clinic gave Carmel the advice to never let law school course work get in the way of his work as a lawyer. It's that advice that helped Carmel to not be afraid to jump right in.

At the clinic, Carmel assisted on many service connection cases for veterans suffering from Post-Traumatic Stress Disorder (PTSD). "It painted a picture of a system that has had difficulty dealing with mental illness over time." He knew immediately, "This is what I want to do, these are the type of people I want to serve. It is a grossly under-served community."

By choosing to work at a full-service law firm with a strong pro bono track record, Carmel, a native of Wall Township, N.J., is able to work as an associate in the Insurance and Reinsurance Group and serve pro bono clients, too. The brief he wrote for the federal Veterans Pro Bono Program case he is working on was so convincing the office of the VA general counsel agreed to a joint motion to remand the case back to Board of Veterans' Appeals, where Carmel is awaiting a final ruling in favor of his client.

"While terrifying, it was incredibly rewarding," Carmel says of his first case. He credits his TVC mentor, Katy Clemens, with helping him each step of the way. The oldest of triplet brothers (if only by a minute), Carmel, says each brother blazed his own trail. But it wasn't until he found something to be passionate about, he says, that he learned to jump right in.

"We are so grateful for the work Josh is doing on behalf of our veterans," says Courtney Smith, Senior Director, CAVC Practice for TVC. "He is a shining star among young attorneys and we are inspired by his enthusiasm in helping us recruit more attorneys for pro bono service to assist our veterans."