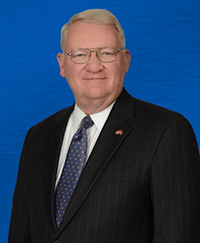 As an analyst and litigator of first and third party coverage disputes with policyholders, W. Douglas Berry's law practice centers on extra-contractual claims, appellate advocacy, municipal liability and reinsurance coverage. He also currently serves as general counsel for his Tampa-based firm, Butler Weihmuller Katz Craig, LLP, after 14 years as managing partner. Yet somehow, Berry has found the time, since 1994, to represent veterans as part of The Veterans Consortium's national volunteer corps. His 20 years as a U.S. Marine must have taught him the precision to juggle so many tasks.

In honor of his legal service to veterans, Berry, 70, has been chosen as The Veterans Consortium Volunteer Inspiring Pro Bono for February 2018. He says he's "honored but undeserving." But that's not what the half dozen or so veterans he's served would say. He's worked tirelessly to represent them, though he's never personally met one of them. There have been no court appearances. "I do it all from my desk in Tampa," says Berry, a Pennsylvania native who moved to nearby St. Petersburg Beach, FL (now known as St. Pete Beach) when he was five years old.

In addition to the pro bono work, any attorney fees he or colleagues from his firm earn from these cases under the Equal Access to Justice Act are donated back to TVC to help more veterans. His firm has made separate donations, as well. That translates to nearly $55,000 since 2003.

Berry got his start with TVC after his good friend, now a Senior Judge of the U.S. Court of Appeals for Veterans Claims, Lawrence Hagel, created the structure and became a founding member of TVC. Berry and Hagel have a long history dating back to being classmates at the U.S. Naval Academy. They went through U.S. Marine Corps basic training together in Quantico, Va., served in Vietnam at the same time and both spent their final tours in the Office of the Judge Advocate General of the Navy in Alexandria, Va. "The door was opened and I was either pulled through or pushed through by Judge Hagel," Berry jokes of his start with TVC. Either way, it was a natural next step for Berry to join Hagel in yet another venture.

"What an honor it is to have such a strong legacy as part of TVC's national volunteer corps," said Courtney Smith, TVC's director of volunteer outreach and education. "Doug's investment of his time, knowledge, and skills to helping our nation's Veterans has been invaluable."