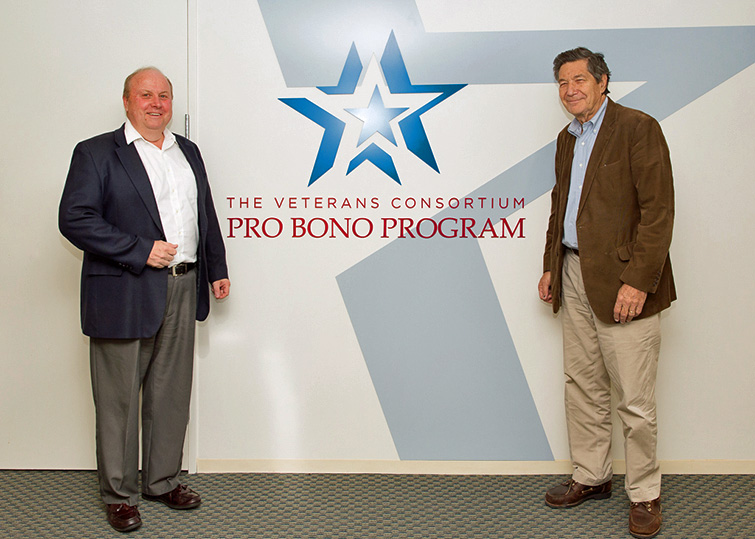 "I retired after forty-plus years of law practice in March of 2016 and wanted to do something that was worthwhile with my newly found spare time. My father had been killed near the end of WWII three months before I was born, and it seemed in some small way helping veterans would honor him. I had heard great things about The Veterans Consortium, and I came in to speak with Executive Director Ed Glabus. While we were exploring different ideas, this remarkable guy named Jim Carlsen came over the proverbial transom. Ed, Jim and I became like the Three Musketeers seeking new worlds to conquer!

"First, we thought it would be great if our volunteers would consider helping their veterans when the U.S. Court of Appeals for Veterans Claims orders a remand. "Second, we saw a real need to help veterans who have received less than honorable discharges for reasons that might be attributable to Traumatic Brain Injuries and Post Traumatic Stress Disorders. Because Jim both prosecuted and defended discharge cases in the Marines, winning whichever side he was on, he was ideally situated to lead the charge on this initiative, with me poised to help as needed in researching and develop our position.

"I am gratified that TVC was interested in my lending a hand. I feel fortunate, not only for the chance to possibly do some good, but also for the opportunity to get to know the remarkable TVC staff and to have the pleasure of making two new friends in Ed and Jim, which at this stage of life is an unexpected joy."

"I came to know The Veterans Consortium initially through the excellent training it provides for its pro bono attorneys to practice before the U.S. Court of Appeals for Veterans Claims. I took an appellate case last year and had the pleasure of dealing with TVC staff and a first rate mentor attorney. After I retired from Northrop Grumman, I decided to become more involved with this remarkable organization. Over the past months we have taken the organization down two new and different paths to provide the best service possible to our veterans. Mike took on the task of coordinating volunteer lawyers, insuring continued representation of the veteran back at the VA following a successful outcome of their appeal at the Court.

"I have been working on a program to aid veterans in the upgrade of ‘bad paper’ discharges. The experience has been both stunning and extremely gratifying. I screen every request for legal help, and in the meritorious cases I see, the veteran with ‘bad paper’ is in dire need of help due to trauma occurring while serving his/her country. The veteran is denied such help by the VA even though ‘bad paper’ discharge was caused by the effects of that same trauma.

"As a former Marine Corps infantry office and JAG I am overwhelmed with the need in this area, and it is a privilege to be able to help. Working with Mike, Ed and the staff at TVC has been exciting and rewarding beyond my expectations."