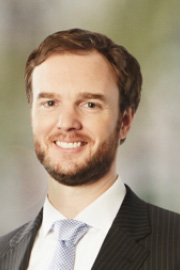 The Veterans Consortium (TVC) often attracts volunteers who previously served in the military. But in an unusual twist, Jonathan Ulrich, a TVC National Volunteer CorpsSM pro bono attorney, was inspired to join the military after working with veterans to navigate the U.S. Department of Veterans Affairs (VA) system and ultimately receive the benefits they deserve.

"I began helping veterans, then decided to put a uniform on myself," says Ulrich, 38, who took leave from his job as an international attorney at White & Case LLP in Washington, D.C. to join the Army National Guard as an Airborne infantryman.

But that's not all. Upon his return to the firm in 2017, Ulrich decided to develop an expanded pro bono project for veterans that would draw in attorneys from throughout his firm's many offices. Nearly 100 lawyers on multiple continents are now participating.

For his dedication to serving veterans and his initiative in recruiting so many pro bono attorneys, Ulrich has been named as The Veterans Consortium Volunteer Inspiring Pro Bono (VIP) for January 2019.

The veteran's pro bono project Ulrich designed at White & Case is also somewhat uncommon. It provides attorneys to help veterans at three different stages: initial claims at the VA Regional Office, appeals before the Board of Veterans' Appeals, and appeals before the U.S. Court of Appeals for Veterans Claims.

"I thought it would be useful to develop depth at each level of the claims process," Ulrich says, citing a desire to "cover the full spectrum," and not just the later stages of a case.

It was one of the things that first bothered Ulrich and has stuck with him — the many years veterans spend seeking compensation. Getting help from an attorney in the earlier stages may help speed resolution to the cases.

"This is dedication," said Courtney Smith, Senior Director, CAVC Practice for TVC, who helped Ulrich with his plans and efforts to expand veterans pro bono legal services at White & Case. "The support that Jonathan has provided both individually and through his amazing recruitment efforts is exceptional. He is a remarkable advocate for veterans and for our services. Jonathan truly deserves to be our January Volunteer Inspiring Pro Bono (VIP)."

Ulrich has had an uncanny knack for finding cases, as well. While serving in disaster relief for the American Red Cross in the aftermath of Hurricane Matthew, he was working alongside a Vietnam veteran who had been fighting a claim for decades. Ulrich took on his case and secured a remand from the Board of Veterans' Appeals. The case is ongoing. When his sister-in-law traveled recently to China, she met a Gulf War veteran suffering from injuries from years ago who didn't know what his options were, Ulrich says. She referred the veteran to Ulrich for similar help.

When he's not working at the law firm, Ulrich continues to serve in the Army National Guard and in disaster relief work with the American Red Cross. He lives with his family in Washington, D.C.