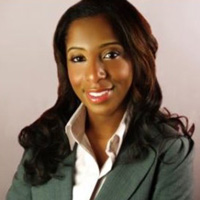 Andréa Augustus thought she was signing up for a continuing legal education course, with the promise that she’d work on one case. Instead, the course, taught by The Veterans Consortium, was just the beginning of years of pro bono work with veterans, whom she considers her favorite clients.

"I got sucked in," says Augustus, with a laugh. "I think what really pulled me in is that my Dad is a Vietnam Veteran and he’s struggled with what he qualifies for in terms of benefits." But most importantly, she says, is that even though it’s her time she’s giving to help veterans, "they are giving to me."

It’s these important relationships, that has kept Augustus, a New Orleans native, returning for more cases. For her exemplary service providing legal help to veterans, Augustus has been chosen as The Veterans Consortium Volunteer Inspiring Pro Bono for March 2018. Augustus, who started her own private practice in 2013, is currently enrolled at Seton Hall Law pursuing studies in Healthcare Privacy Law. She enjoys learning about the veterans, their jobs, their history. "There’s just a different way you interact with a veteran who has had a case in limbo for many years. They are very gracious," she says. "The practice of law is draining and you do need to be replenished. Doing the work with veterans, that does that for me."

One case stands out to Augustus. It involved a World War II veteran who suffered medical issues related to exposure to asbestos on the ship where he served. His case was initially denied with a finding that there was not substantial exposure. Augustus did some digging and found that the ship was out of commission because of asbestos. "When you find that, it’s exciting," says Augustus, a single parent to an energetic six-year-old girl. Despite her successes, there’s still one file she’s not allowed near – her father’s. "He won’t let me touch his files," she says. "But he’ll ask me questions."