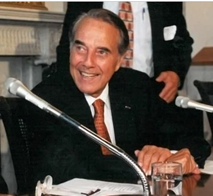 Our December 2021 Volunteer Inspiring Pro Bono (VIP) is the late Senator Bob Dole, a tireless advocate for veterans, who volunteered his time and talent as a member of our TVC National Volunteer Corps.

In addition to being a prominent statesmen and our nations’ longest serving Republican leader, Senator Dole was one of our own. In 1997, Senators Dole and Mitchell joined forces with TVC to successfully represent an Army veteran. Both Senators were veterans themselves and with the firm Verner Liipfert Bernhard McPherson & Hand. The appellant, Mr. James Gaddis, was a Vietnam veteran and Bronze Star recipient whose claim involved service connection for a serious spinal cord illness. This was a landmark case for TVC as it was the 1,000th case taken since TVC's 1992 founding.

Senator Dole served in the Army’s 10th Mountain Division during WWII, where he was gravely wounded. He was just 22 years old and serving in Italy when he was shot in the upper back and right shoulder, shattering his collarbone and part of his spine. He was left for dead on the battlefield, where he lay clinging to life for 10 hours before medics found him. He returned home from the war in a body cast, mostly paralyzed, and spent over three years recovering from his injuries. He received two Purple Hearts and the Bronze Star with Oakleaf cluster for his wounds and heroism.

Senator Dole never forgot his fellow veterans and spent the entirety of his career advocating for them, as well as the disadvantaged and disabled. Most recently, he could be spotted at the WWII memorial on weekend mornings, posing for photos with veterans and anyone else who asked. He viewed his presence there as a continuation of his public service.

The Veterans Consortium mourns the loss of a national hero who spent his life advocating on behalf of his fellow military veterans. His passion and perseverance are an example to all of us of a life well lived.