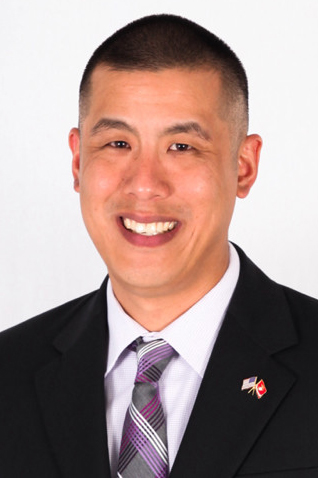 Chanin Nuntavong currently serves as the Executive Director of Government Affairs for The American Legion National Headquarters. His responsibilities include managing a staff dedicated to the timely and compassionate delivery of benefits earned by U.S. military veterans; oversee the daily functions of employees who support the government affairs commissions and committees of The American Legion (i.e. Legislative, National Security, and Veterans Affairs); formulate plans, policies and programs on direct assistance, outreach and support for veterans and their families; and serve as the liaison for the White House (President and Vice-President), Cabinet Secretaries, and other organizations with an interest and impact on veterans’ issues.

Chanin retired from the U.S. Marine Corps as Gunnery Sergeant, with more than 22 years of service, where he served as a combat correspondent in the Public Affairs field. Notably, he served in the Pentagon as the official spokesperson and advisor to the 16th, 17th and 18th Sergeants Major of the Marine Corps. His personal decorations include two Meritorious Service Medals; two Navy and Marine Corps Commendation Medals; and three Navy and Marine Corps Achievement Medals.

Chanin is a member of American Legion Post #43 in Hollywood, Calif.; member of American Legion Auxiliary Post #364 in Woodbridge, Va.; executive board member of The Veterans Consortium Pro Bono Program; and representative member of the Department of Veterans Affairs Special Medical Advisory Group. He earned his Bachelor of Science from Liberty University; and currently resides in the Washington D.C. area with his wife and two teenage boys.